It won’t be long now. Kent Breazeale’s second novel, The Willmakers, will be out Monday, April 14.

“There are those among us who are not preachers or evangelists or teachers or even missionaries. They don’t work in the church in an official capacity, yet are used by God in tremendous ways. Many times even they are unaware that they are acting in the very heart of the will of God. They are as common as the sands of the seashores, yet they come and go unnoticed as they pass into obscurity once their work is done. They are the ones born with the destiny to be guided by God to shape the events of the world.”

In the spring of 1874, missionary Ann Wallace felt called by God to embark on a journey that would take her north along the Natchez Trace traveling among the highwaymen who wait to rob, rape and murder passing travelers. Along the way she becomes stranded in the small town of Trace, Mississippi where she meets the ones who are destined to travel with her. She meets Adam Tara and his two younger brothers and becomes confused about her calling when she falls in love with Adam. She questions her dedication and feels torn between her duty as a missionary and her emotions as a woman.

While the names of highwaymen in The Willmakers are fictionalized, the actions of Maggot Mays and his cohorts are similar to those of the South’s real highwaymen between 1700 to the early 1900s.

The real Natchez Trace has a rich history that is sprinkled with a dark and dangerous past as it a prime route where many of the South’s infamous highwaymen committed unspeakable crimes.

A few highwaymen known to have committed most of their crimes along the old Trace include the Harpe brothers, Samuel Mason, Peter Alston and Joseph Thompson Hare. 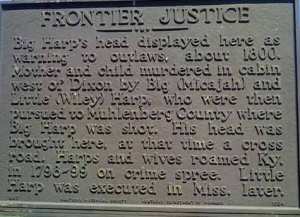 The Harpe Brothers–Micajah “Big” Harpe’s year of birth is not certain but is believed to 1768. Big Harpe died in August 1799. Wiley “Little” Harpe (aka John Setton) is believed to have been born around 1770 and died in January 1804. The Harpes, cousins who often claimed to be brothers, were America’s first known serial killers. They were Loyalists in the American Revolution fighting for the British. The Harpes preyed on travelers along the frontier highways of Tennessee, Kentucky, Illinois, and Mississippi. They were associates of Samuel Mason and Peter Alston.

Samuel Mason (1739–1803) ran a gang of highwaymen along the Natchez Trace, a gang of river pirates on the Mississippi River and at Cave-In-Rock on the Ohio River, and was an associate of the Harpe Brothers and Peter Alston. A detailed biography of Samuel Mason (Kathy Weiser, January 2013) can be found on the Legends of America website.

Peter Alston (1765-Feb. 8, 1804, aka James May) was a highwayman, counterfeiter, and river pirate who was believed to be an associate of Samuel Mason and the Harpe Brothers.

Joseph Thompson Hare, Lewis Hare, and John Alexander (d. 1818) were lower Mississippi River/Natchez Trace highwaymen and Baltimore mail coach robbers. According to court documents (US v Hare, 1818), the three men were convicted of robbing the mail and sentenced to death.

We hope this has sparked your interest in the backstory and that you’ll dig into to history and learn a bit about the highwaymen and the setting of the old Trace–definitely not a place for a young missionary woman to be traveling.