Skip to primary content
Sometimes things are unnecessarily confusing. Especially when one spouse is a slightly paranoid mystery buff (who’s seen almost every Hollywood classic film from the 1930s and 1940s) and the other spouse is suddenly acting quite suspiciously.
[Note: this is slightly embellished from an actual conversation on 1-27-2016.]
“Supper’s ready,” said my wife, as she pointed to one of two identical-looking small casseroles. “This one is yours.”
That automatically set off alarm bells. “What do you mean?” I asked, stepping closer to the kitchen counter.
“I mean,” she said, pointing a fork directly at the dish on the left, “this casserole is yours.”
Now I’ve seen way too many poisonings in classic movies and I know exactly how the murderers operate. They always keep careful track of the dish with the poison. I leaned over, peering closely to see if the toxin were visible to the naked eye. “Why that one?”
“I made that one for you,” she replied, again nearly stabbing it with her fork.
“So, uh, what’s in it?” I asked, trying to act nonchalant, though I was sure my demise was imminent.
Placing the fork carefully on the edge of her casserole dish, my wife squinted as she scrutinized my face. “Chicken and pasta and sauce… basically.”
That final qualifier almost certainly meant she’d neglected to mention the hidden toxic ingredient. Unconsciously, I stepped backwards a few inches. “Uh, what’s in yours?”
Emitting a heavy sigh, she replied, “the same.”
I wasn’t getting anywhere and I was certain the casserole poison was becoming more potent by the moment. “Then how come that one’s mine?”
Now with both hands on her hips, she replied, “Because I made that one for you.”
Here we go — the poisoner always confesses.
Yet I still needed to know the exact poison so I could tell the responding medics which antidote I would need. “What else is in mine?”
This time her sigh clearly reflected mounting aggravation. “Nothing else.”
“Then how is it different?” I asked.
Her lips thinning, she replied, “yours has slightly more.”
Aha! I’d caught her admitting the crime! “More what?” I demanded.
Shaking her head silently, she picked up a hot pad and nudged my dish closer toward me. “More noodles and chicken.”
At moments like this, I mentally scan all the mysteries I’ve ever viewed for a similar scene… but none matched. This was unprecedented. That left only one conclusion: “So mine is just a slightly bigger portion?”
Rolling her eyes, she replied, “yes.”
“Well,” I said, somewhat sheepishly, “why didn’t you say so?”
J.L. Salter is an author of two titles with TouchPoint Press: Stuck on Cloud Eight (Oct. 2015) and Size Matters (Oct. 2016). He has 12 other fiction titles with two other publishers. 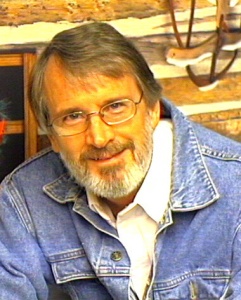 Romantic comedy, screwball comedy, and romantic suspense are among Salter’s 12 completed novel manuscripts and five completed novellas. Twelve of those 17 titles are already published and another is contracted for release in early 2016.

Besides his fiction work, Salter is co-author of two non-fiction monographs (about librarianship) with a royalty publisher, plus a signed chapter in another book and a signed article in a specialty encyclopedia. He’s also published articles, book reviews, and over 120 poems; his writing has won nearly 40 awards, including several in national contests. As a newspaper photo-journalist, Salter published about 150 bylined newspaper articles, and some 100 bylined photos.
Salter worked nearly 30 years in the field of librarianship. He’s a decorated veteran of U.S. Air Force (including a remote tour of duty in the Arctic, at Thule AB in N.W. Greenland).
Salter is the married parent of two and grandparent of six; he and his wife are active members of First Baptist Church in Somerset, KY.
For more information about Salter, please view his Facebook Author Page:
https://www.facebook.com/AuthorJLSalter
Or his Amazon author page: http://tinyurl.com/Salter-JL-Amazon