In my previous post, I’m Going to Write a Book, I stated that I am a regency romantic suspense writer. For those of you who aren’t familiar with romantic suspense, it is equal parts romance and mystery, i.e. who done it. Think of the “suspense” part in television shows such as, Castle, NCIS, and Major Crimes. They all have police go through suspect after suspect until they unveil the murderer. In my writing I take that aspect and add romance between the two main characters. 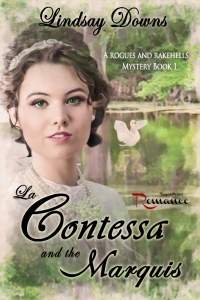 La Contessa and The Marquis by Lindsay Downs

So, why regency over contemporary romantic suspense, you ask? The challenge. More years ago than I care to recall, I was attracted to the regency genre of romance, the lords and their ladies or as I prefer the ladies and lords. The language from this era is a challenge in itself and I’m not one to shy away from it. For example, let’s take the word “thug”, can I use it? Well that depends on what year the book is set. According to my dictionary it didn’t appear in the English lexicon until 1810. Sure commoners might have used it earlier but I can’t have an Earl use it. The same goes for the word “navy”, 1834. Nope, can’t use it unless the story is set then or after, as in the Lady Jolene Mystery series.

Creating a realistic storyline when it comes to finding the criminal is another challenge because collecting evidence, for the most part didn’t exist. Everything had to be accomplished by a mixture of skill at uncovering the truth and downright luck. If the wrong person was convicted of the crime he or she did, as I love to call it, the hangman’s jig.

As I said above, it is a challenge to create a totally, or so I hope, unique story where you the reader might have to go to the last chapter of the book to find out “who done it”, but I like leaving my readers on their toes.

I’ve been an avid reader ever since I was old enough to hold a red leather bound first edition copy of Sir Walter Scott’s The Lady of the Lake in my lap.

So it only seemed natural at some point in my life I take up pen and paper to start writing. Over time my skills slightly improved which I attribute to my English teachers.

My breakthrough came about in the mid 1970’s when I read a historical romance written by Sergeanne Golon, Angelique. This French husband and wife team opened my eyes to the real world of fiction. Stories about romance, beautiful damsels, handsome heroes and plots which kept me hooked. Of course, being a man, I had to keep my reading hidden from others as that wasn’t appropriate reading for men.

With this new found appreciation of the written word I took up other books and devoured them as a starving person would a plate of food. I them attempted to write again. I still wasn’t satisfied so I put it aside for years as other events entered my life.

Finally, in the early years of the new millennium I tried again to write and once again met with limited success. At least now I was able to get past the first page or two. Then, in 2006 a life changing event brought me back to my love, I took a job as a security officer. This allowed me plenty of time to read different genres.

My favorite was regency. As I poured through everyone I could get my hands on I knew this could be something I wanted to attempt.

Since 2012 when my debut regency romantic suspense released I was hooked and have, except for a few contemporaries, focused on this genre.

Since 2012 I’ve lived in central Texas. I’m also a member of Romance Writers of America and the Austin, TX chapter.

Where you can find me:

1 thought on “Why do I write what I write? by Lindsay Downs”