Last week, TouchPoint Press released Overcome: A Story of Intervention, Rescue, and Redemption by Glen and Debbie Kirkpatrick. It is primarily the story of a man who survived multiple cancer diagnoses, but it is so much more than that. It is a story of thriving in marriage despite hardship, finding the love and healing of Christ after a long road of suffering, adoption, hope, life…so much. The heart of the story – an intimate look of someone who has battled cancer and survived – is something that everyone can relate to.

On a personal note, my heart soared when I read the hope that Glen and Debbie have found through their journey because I have watched many of my family members struggle with cancer. Some of them won. Some of them didn’t. I consider myself lucky to be able to work with the Kirkpatrick’s on the grace-filled account of their own journey. I pray that the Kirkpatrick story will be a beacon of hope for our readers and that it finds its way into the hands of whoever needs it most. 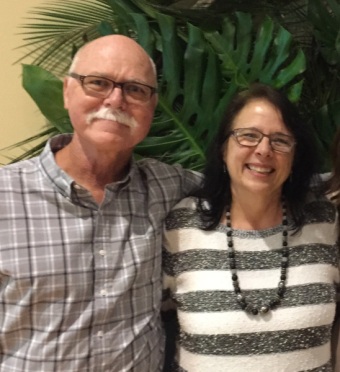 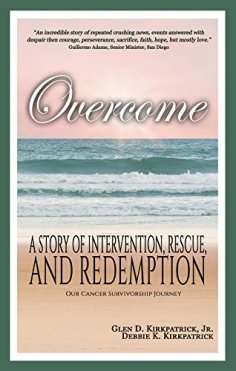 Glen D. Kirkpatrick, Jr. and his wife Debbie are the authors of “Overcome: A Story of Intervention, Rescue, and Redemption.” TouchPoint Press is due to release Overcome later this year.

Glen and Debbie, make their home in San Diego, California. They have three adult sons, Terrence, Trevor, and Russell; one daughter-in-law Carmen; one grandson named Zion; and a granddaughter named Isabel.

Glen is a three-time, 30-year cancer survivor, living with the late effects of radiation and chemotherapy. He enjoys sharing what he’s learned about how to persevere in life, the importance of finding joy in each day, and the significance of living in the moment. Glen writes about faith, family, and overcoming obstacles. Glen’s wife, and co-survivor, Debbie K. Kirkpatrick, wrote the chapter titled, “Devoted” for their book Overcome.

How did you decide to write Overcome?

In 2011, I was talking with my friend, Handly, who was serving as a youth ministry intern in our congregation, at a friend’s college graduation party. He told me he was inspired by my faith in the face of obstacles and asked me if I was doing any writing. I told him I wrote a non-fiction book proposal in the early 2000’s, but I stopped short of writing a full manuscript. He suggested I start a blog as a way for me to return to writing. My friend’s belief in me was the inspiration I needed to move forward. Within days my blog, “Overcoming Daily” was born.

In 2012, Disciples Today published my story “Overcoming Obstacles in Christ.” In 2013, my story, “Outlier,” was published in Coping with Cancer magazine. Writing had become my personal ministry, something I could do, and do well. And I could do it even with the limitations of living with chronic illness. I had found my voice!

Soon I found myself writing the manuscript for Overcome most every day.

What was your writing process?

I would write at home, or at one of my favorite cafes. My wife Debbie and our editor-friend reviewed and gave valuable input on the manuscript as the number of chapters grew. Inspired by Debbie’s ongoing demonstration of love and support I asked her to write a chapter titled “Devotion.”

What did it feel like to complete your manuscript?

Having TouchPoint Press walk me through the editing process gave me an extreme level of confidence they would be publishing a high-quality product. After years of working on the book, it was rewarding knowing the manuscript was finally done.

What are our hopes for the new publication?

Debbie and I hope our book Overcome reaches a great number of readers including cancer survivors, Christians, and those who don’t yet know God. We have plans to use the book’s message of intervention, rescue, and redemption, and overcoming obstacles as a platform for public speaking engagements. Book royalties would supplement our household income, and help us support a non-profit organization that benefits children and the poor.

1 thought on “Overcoming with Glen and Debbie Kirkpatrick”