Sean Paul Murphy was born and raised in Baltimore, Maryland. He graduated from Towson University with a major in Mass Communications and a minor in English, with a Concentration in Writing. After college he worked at Smith Burke & Azzam, a hot regional advertising agency, as a broadcast producer and occasional copywriter.

Sean left the agency to pursue work as a freelance film editor, cutting television commercials, rock videos and cable network shows. He also signed with the late Stu Robinson of Robinson Weintraub and Gross, later Paradigm, as a screenwriter. His early work brought him letters of praise from Academy-Award winners like Barry Levinson and the late Richard Zanuck.

Sean’s first produced film was an innovative mystery called “21 Eyes,” starring Academy Award winner Fisher Stevens (“The Cove”) and Rebecca Mader (“Lost.”) The film was released by Vanguard Cinema and has been called “sleek, stylish and cunning” and “a courageous, absorbing and unique piece of indie film making.”

Sean’s next produced film was the faith-based drama “Hidden Secrets,” starring John Schneider (“The Dukes of Hazard.”) Released by the Weinstein Company, the film was a Top 10 CBA seller and enjoyed limited theatrical release. The success of that film led to commissions to write more faith-based productions including “Holyman Undercover,” “Sarah’s Choice,” “Run On,” “The Encounter,” “Marriage Retreat,” “Brother White,” “The Encounter: Paradise Lost,” “Revelation Road: The Beginning of the End,” “Revelation Road: The Sea of Glass and Fire,” and the upcoming “Open My Eyes” and “Revelation Road 3.”

Sean might be best known for his award-winning work with the Federal Bureau of Investigation, Counter Intelligence Division. His film “Betrayed” recently won an Emmy, and his controversial docudrama “Game of Pawns,” has been featured on network news shows and garnered him interviews with news outlets from NPR’s “All Things Considered” to the BBC.

Sean is also a winner of the prestigious the $50,000 Kairos Prize for Spiritually Uplifting Screenplays in 2012. His original screenplay, “Desecrated,” was a semi-finalist in the Slamdance Horror Competition. His feature-length film “Sacred Ground: The Battle For Mount Auburn Cemetery” was recently voted Best Documentary at the Churches Making Movies Film Festival.   He has also written numerous award-winning short comedies.

Sean married the lovely Deborah Lynn Crum and has three stepdaughters and three grandchildren. He can be found playing guitar every Sunday morning in the praise and worship band at Stillmeadow Evangelical Free Church in Baltimore. Come out and see him some time! 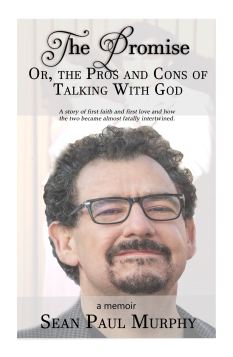 Praise for The Promise
Book Review: THE PROMISE, OR THE PROS AND CONS OF TALKING WITH GOD by Sean Paul Murphy