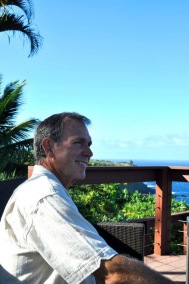 William West shares his time between Austin, Texas and Traverse City, Michigan depending on the season when the weather is tolerable. He lives with his wife and two dogs. He began writing later in life after a lengthy law enforcement career in Santa Barbara, California. A co-worker once told him he seemed more like a college professor, which helped to steer him toward writing. His debut novel, Evolution of a Young Man in Love, was published in 2018.

The Ascension of Mary – Upcoming