1.Most of the books you have published somehow involve the practice of law. What is your background in that profession?

I practiced law in a small town in Iowa for 41 years. I was elected and reelected County Attorney seven times during those years. Since we lived in such a small county, I could also have a private practice as well as serve as County Attorney. My private practice consisted of domestic issues, litigation, estate planning, and real estate issues. I also owned the only title company in the county. While writing, I often draw on all those years of experience in both the courtroom and office practice.

2. Where did the initial idea for An Absence of Ethics originate from?

Many times I use the attorneys Cannons of Ethics for ideas, not so much from the standpoint of attorneys following them, but from the standpoint of attorneys NOT following them. The story line for An Absence of Ethics was developed as I considered what might happen if a lawyer became involved with a judge during the course of a trial. I tried to determine, as I do in most of my novels, just what it would take for an attorney to cross the line—to do something unethical—and then develop a story around that premise. With Rosa Norway, she had placed her years of developing a thriving practice, above everything else, including her relationship with the opposite sex. When she met the right man, he just happened to be the judge presiding over her case. It happened at a time in which she was vulnerable, and love trumped the Canons of Ethics. I have a number of other thoughts about story’s emanating from a lawyer’s violation of the Canons of Ethics, but whether they will actually develop into an interesting story line remains to be seen.

I love writing. While I was involved in the active practice of law, it was necessary for me to prepare briefs and pleadings concerning civil and criminal cases on a frequent basis. Many times during my career, I would try to find the right time to start writing a novel based upon an idea I had developed during the prior week. But I never find the time to finish anything—the workload I maintained kept me from finishing any novel I started. After I retired from the active practice, I then had the time to write a couple of novels. Once I realized I had the ability to start and finish a full novel, I came up with a number of ideas concerning stories I wanted to pursue. Now I find myself wanting to do nothing, but write.  I have published 5 novels and have many more in mind. I love the challenge of putting the story together, making sure it’s believable, and most importantly, making it enjoyable for the public to read.

4. Where did the character Roy Brakus come from? Is he based on someone you knew or know?

No he isn’t based upon anyone I know, but his situations are based upon some of my own courtroom experiences. To be honest, that story started out to be more about the lawyer, Dan Jacobs, than it did about Brakus. But the further I got into it, the more comfortable I felt writing about Roy. He remained the focal point throughout the trilogy. As I wrote Brakus, I found out something about myself. I found it easier to write on the dark side than I did writing a comfortable, tidy little love story that pulled everything together properly at the end of the book. The more of the mean side of life I got into with Brakus the more self-satisfying it seemed to be. I don’t even attempt to write in any other style anymore—I’m just not comfortable with it.

5. Did you do an extensive amount of research for your novels?

No, not a great deal.  The move my wife and I made from Iowa to Tennessee after I quit the practice did create a small problem. As concerned legal procedure, I was completely familiar with the Rules of Criminal procedure in Iowa, but was, unfamiliar with the rules in Tennessee. Procedural rules differ from state to state. Many of the rules are similar, but not precisely the same. As I did want to keep the courtroom procedure as accurate as possible and within the provisions of the Tennessee rules, it was necessary to research those rules. I now, once I complete my novels, have a Tennessee attorney review it for procedural errors. The one exception concerning doing an extensive amount of research involves a new fictional series (4 volumes) I am writing called To Hide from a Northern Wind, which chronicles a feud which takes place in central Tennessee starting in 1875 and runs through 4 generations, using historical events as a background. Obviously, research concerning historical events nationally and in Tennessee during those 140+ years is vitally important.

6. Where do your novels take place?

I find it difficult to write about a location within any of my novels which I have never been a part of in some respect. I, for instance, would have a difficult time writing a novel about a factual situation that occurred in the State of Washington or in Connecticut, since I have never lived there, nor been a part of the locals that live there.  Brakus started in the northeast United States and moved to Miami. I spent some time researching those areas, but the bulk of the Brakus trilogy and all of An Absence of Ethics, along with all those novels written and yet to be published, all take place in and around Nashville.

7. Do you outline all your novels before you start?

Absolutely   That doesn’t necessarily mean I strictly follow that outline, but before I ever start, I have a very brief outline of each chapter. I then break that outline down, concentrating on the first ten chapters. I then concentrate on only the first three chapters and finalize my thoughts only on those. Once I have fully written those three, I concentrate on the next three until the book is completed. There’s always a considerable amount of movement that goes on between the first chapter and the last, but this is the system that works best for me.

8. Do you have a favorite time of day to write?

Definitely  I write in the mornings. Many times I have finished what I wanted to finish before my wife wakes up, and sometimes before the sun comes up. I am a morning person. I like to write before all the issues of the day have a chance to wear me down. I have tried changing that, but generally if I haven’t written something worth writing before noon, I might as well give up for the day and start over in the morning.

9. Do you ever get writer’s block?

I never have. I have published 5 novels with a 6th on the way. I have 4 completed novels in my computer, and 5 more generally outlined. There are times I am uncertain which way the story should be moving, and sometimes that causes me to stop and reassess, but I’ve never been unable to figure it out and move right on.

10. Do you have any advice for young writers, that haven’t yet become successful, but love to write?

I sure do. Don’t quit your day job. Find a job you enjoy doing and just write when you can. If it’s going to happen it will happen, but I’ve seen plenty of broken down singers in Nashville, that just felt they “needed to be true to themselves” and just had to “follow their dream,” who wish they hadn’t once they reached the age of 75 and still hadn’t published. There are enough hours in the day to work, and write until someone has reached the point where they have become successful at writing and can quit their day job.

11. Most of your novels don’t seem to have a storybook ending—any particular reason?

I don’t like endings that tie everything together in a tidy little package. I don’t like reading other people’s books that are written that way either. When I do read another author’s novel that ends that way, it reinforces my desire not to write that way, no matter how good the novel might be. I like open endings. I like a surprise at the end. I like the intrigue a book with an ending that isn’t clear cut, presents to the reader. With an unsettled ending, the reader can use his own imagination, and end it himself. Of course, with an ending that leaves a doubt, there’s always the possibility of a sequel if the public enjoyed the first one.

12. Many of your novels seem to involve and revolve around a strong female character rather than a male character. Any particular reason?

Not really, although I will say I love writing about a woman that’s strong, that’s not afraid of anything and that will make certain you know it. I do believe we are only starting to scratch the surface concerning women’s involvement and role in all aspects of life as we know it. I believe they are just starting to realize that they aren’t and never were the inferior sex. To me they are much more interesting to write about because there is always a mystique about them, about how they really feel and what they are really like, regardless of the persona they present. Their outward appearance never seems to be an indication of what they are truly capable of doing, both mentally and physically. Such is the case with Kat in the Brakus series, with Rosa in An Absence of Ethics, with Lois in Out of Reach and will be the case with novels I have yet to publish. 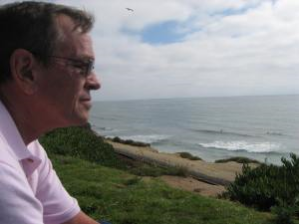 J.B. Millhollin was born in Southwest Iowa and attended Law School at the University of Nebraska. He began practicing law in Corning, Iowa and remained in practice in that small farming community for 41 years. He left Corning with his wife of 42 years, in 2012 and now resides in Mt. Juliet, Tennessee. His current plans are to continue to write until he is too old to figure out how to use the computer.