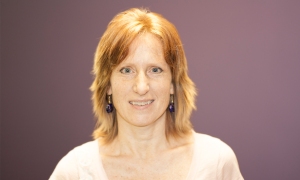 A lifelong business writer who dabbled in creative writing on the side, S.M. Stevens found her opportunity to write fiction in earnest when she broke her pelvis in three places in a horseback riding fall. On crutches for three months and unable to commute to work, cook, clean or shuttle kids to activities, she turned to writing. The result was Shannon’s Odyssey, a middle-grade novel written for her younger daughter.

The following year, Stevens was diagnosed with ovarian cancer, which was treated with surgery and five months of chemotherapy. During this recovery, she wrote Bit Players, Has-Been Actors and Other Posers for her older daughter and all musical theatre-loving teens. Two additional Bit Players novels followed, filling the void in fiction for fans of performance shows like the Glee TV series and the High School Musical movies.

Horseshoes and Hand Grenades is her first adult novel, which was prompted by the #metoo movement. Fascinated by the parallels between workplace sexual harassment and childhood incest, specifically how society asks many of the same questions of both types of victim, she wrote the dual narrative of Shelby and Astrid, two women starting their careers in 1980s Boston while struggling with past and present demons.

Stevens has a bachelor’s degree in English from Cornell University. She also studied at University College at the University of London. She lives in Berlin, Mass. She has two daughters, a dog and a cat.

Horseshoes and Hand Grenades will be released September 27. It is available for preorder on Amazon and on our online bookstore.